John Zerzan’s “Twilight of the Machines” 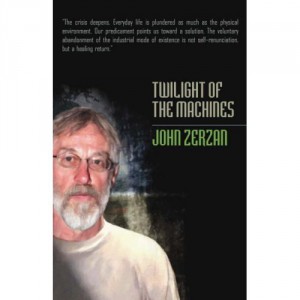 John Zerzan is now one of the most well-known of contemporary North American anarchist writers and theorists, along with Noam Chomsky and Hakim Bey (and formerly, prior to his definitive renunciation of his already questionable anarchism, also Murray Bookchin). Zerzan is best known as one of the major proponents of anarcho-primitivism and green anarchy, along with Fredy Perlman and others. Beginning with his essays appearing primarily in The Fifth Estate in the 1980s (collected in his central and still most important work, Elements of Refusal), Zerzan has built an impressive edifice of documentation, critique and speculation ranging over the lifeways of nomadic paleolithic gatherer-hunters to the origins of symbolic culture and civilization to the intensification of contemporary alienation in runaway technology, hyperurbanization and the emptiness of everyday life in mass consumer society and post-modern culture. Twilight of the Machines contains Zerzan’s latest essays from the new millennium, this time primarily collected from Green Anarchy. This new book follows Running on Emptiness: The Failure of Symbolic Thought and Future Primitive, both of which collected essays mostly appearing in Anarchy: A Journal of Desire Armed during the 1990s.

For the most part, Twilight of the Machines is an eloquent call for each of us to face the appalling predicament of the entire human species as the globalizing spread of modern techno-industrial civilization continues to destroy the natural world, degrade what’s left of face-to-face communities, and lead human society towards an impending global collapse. While not light reading by any means, the essays in Twilight of the Machines are all fairly short (the longest seems to be only 11 pages). And although the book might seem a bit thin at 141 pages, the short format, like that of his previous two collections, will most likely make it more approachable for a larger range of potential readers than a more intimidatingly long volume might. One small problem is that since the book consists of a collection of relatively short essays often dealing with similar or parallel topics, there is a fair amount of repetition of arguments. For example, the same general (and accurate) criticisms of postmodernism sometimes appear in one form or another in essay after essay.

Central to many of Zerzan’s arguments is a scorched earth attitude in which just about any particular aspect of life which has been colonized to any significant degree by capital, state, technology or ideology is deemed to be not accidentally, but essentially complicit with the domination and alienation of techno-industrial civilization and, thus, to be in need of complete removal. No nuanced analyses or shades of gray are allowed. Everything is simply black and white, and you’re either for (his vision of ) life or against it. In many essays, an army of quotations and notes from an array of writers and texts (some revealingly relevant, but others at times rather irrelevant) are marshaled to the particular task at hand of critically destroying whichever aspect of life is targeted this particular time (the essays on the origins of civilization in Elements of Refusal on agriculture, language, art and number are paradigmatic here). If he was a physician, Zerzan’s diagnosis would appear to always be the same, complete corruption, with amputation of the offending body part the only solution ever offered.

Twilight of the Machines opens with “Too Marvelous for Words,” contrasting language as “a powerful instrument for technological and social disenchantment” with the alternative of direct, unmediated presence (though he never explains what it could possibly mean for unmediated presence to be – self-contradictorily – “enchanted”). For Zerzan, it seems, everything about language (and symbolization in general) is bad news and not just unnecessary, but even (at least metaphorically) pathological. No attempt is made to chronicle any redeeming qualities of human communication through use of languages. Nor, does it seem, is there any possibility within his perspective for the existence of any worthwhile, freely-chosen, unalienated linguistic communication at all. Radical writers and theorists who might distinguish the ideological debasement of language from more convivial and authentic linguistic communication are simply ignored. In Zerzan’s view it is language itself which is inescapably ideological. At one point he argues that: “The grammar of every language is a theory of experience, and more than that, it’s an ideology.” (p.5) Beyond this, Zerzan repeatedly argues throughout the book that all use of language (and other forms of symbolic communication) is necessarily alienating. But somehow it must be possible to use grammar and language in at least relatively non-ideological ways, else why does Zerzan continue to speak and write his critiques rather than foregoing writing and speech for the more direct communication he advocates? And if Zerzan can make worthwhile use of language for liberatory purposes is there any reason why anyone else should not do the same, while leaving behind the self-contradictory, ideological weight of a dogmatic denunciation of all symbolic culture?

Inevitably, the critique of symbolic culture in itself as the prime cause and motor of human alienation will continue to be viewed skeptically by most radicals, since the development of alienation is more plausibly described and explained as a larger social process in which particular aspects of symbolic culture are progressively reified, enlarged and turned against the individual and society, just as aspects of every other sphere of human life are progressively reified and turned against us. The identification of a fundamental and seemingly prime cause of human alienation which can be potentially separated, isolated and demonized will inevitably appeal to some of those who prefer relatively easy answers to highly complex questions. But there is no evidence that symbolic culture in itself is necessarily a form of human alienation. However much symbolic culture may involve less direct and more abstract forms of interaction with the human and social world, these forms of interaction are never in themselves necessarily alienating. The systems of symbolization and highly complex forms taken by communication using these systems will certainly always be fraught with opportunities for the creation of ideological justifications and apologies for alienating human activities and relationships. But just as certainly, these same complex forms of symbolic communication can also be used to expose and subvert ideologies. They are not themselves simply and reductively identical with ideology.

Similarly, social alienation does not arise in every instance of the division of labor – at least not in every instance as long as the freely-chosen coordination and division of convivial tasks also falls under this label. (And if it doesn’t, where else is it being hidden in Zerzan’s writings?) There is never a problem if one person enjoys hunting and another leisurely gathers in order to share the fruits of their activities later. Nor is it a problem if one group of people in a community builds a house while another group gardens and others pursue different complex tasks they set for themselves in coordination with their families and friends. Rather it is the forced division of labor that always involves human social alienation. It is when people are enslaved, trapped in their activities, see no way out and eventually stop trying to escape from their prisons that they alienate their activities and lose sight of their original desires to live freely.

The important aspect of truth in Zerzan’s formulations is that as the various forms of human social activity and communication become more abstract, complex and distancing they become less and less likely to be freely desirable or communally sustainable absent self-alienation. The more elaborate and rigid that divisions of activities become, and the more intricately systematic their required symbolic and technological infrastructures, the more likely it will be that these divisions of labor and complex infrastructures will also require manipulation and, ultimately, force to maintain them. In this process their human participants begin to mimic the behavior of machines in order to fulfill their roles in an increasingly alienating division and coordination of tasks. And the more human beings reduce themselves to machinelike activities, the more likely they will then be further forced to do so – rather than participating of their own genuinely free wills – in the ever-intensifying process of self-alienation and its accompaniments, forced labor and its ideologies.

Possibly most interesting in Twilight of the Machines, at least in relation to the general theme of the Modern Slavery journal project, is Zerzan’s essay on “Globalization and its Apologists: An Abolitionist Perspective.” Here he explicitly aims his anarcho-primitivist critique at “our century’s version of slavery.” He plausibly identifies the rise and spread of domestication with the rise and spread of civilization. And he definitely understands that (in his terminology) “globalization” – understood as the latest stage of domestication and civilization – is so overwhelmingly parasitic on our lives that it is now threatening to overwhelm and destroy its hosts. But he is nowhere able to focus on the process of self-alienation itself as the target for abolition, rather than the particular places it happens to inhabit.

In any case, it is abundantly clear that modern divisions of labor, technological systems and their mass consumer cultures have long passed the point of no return for potential desirability or sustainability in any humanly free and consenting ways.

← Strangers in an Alien World
Curtains of Blood: A Peek behind the Phenomena of the Grand Guignol →