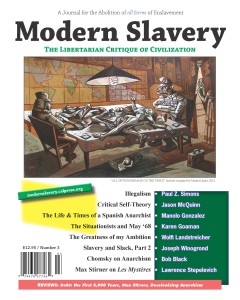 After an amazing number of difficulties over the last year Modern Slavery #3 has now been published and is in the process of being distributed. It should be showing up on newsstands throughout North America by now. It has been most recently delayed by the closing and bankruptcy of what was until recently the largest magazine distributor in the US, SOURCE-INTERLINK. However, we have arranged for alternative distribution to replace most of the sites lost with the final extinction of Source-Interlink, and subscription copies are also now being shipped!

An Introduction to Modern Slavery: Part 3 by Jason McQuinn p.7

Illegalism: Why Pay for the Revolution on the Installment Plan…When you can Steal One? by Paul Z. Simons  p.8

An Interview with Manolo Gonzalez: On anarchist culture in the Spanish Revolution  p.62

The Situationists and May ’68: Chapter 3 of The Old World is Behind You by Karen Goaman p.74

The Greatness of my Ambition: Chapter 3 of Strangers in an Alien World by Wolfi Landstreicher p.93

The Mysteries of Paris reviewed by Max Stirner – translation and introduction by Lawrence Stepelevich  p.172

MODERN SLAVERY Notes: Can We get Serious? by Jason McQuinn p.6

Continue to Issue #4 Table of Contents