Dispatches from Brazil Two: The Pot comes to a Boil, Many Demos, and Is there any Right left? 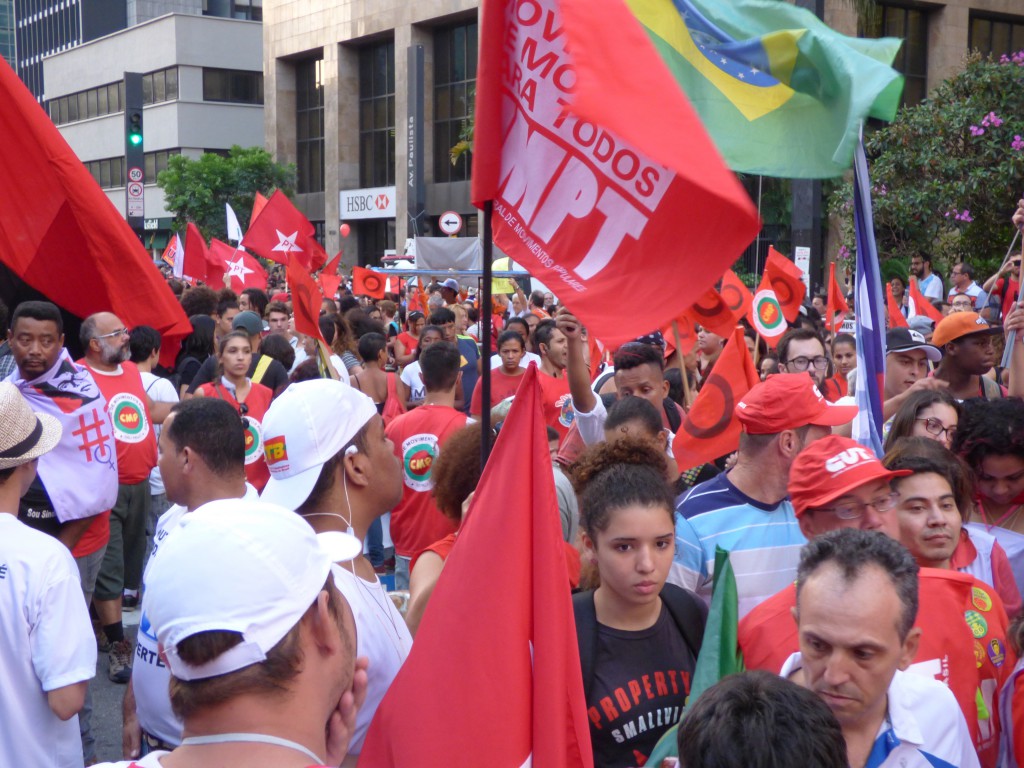 (São Paulo, Brazil) The orange halogen glow of the lamps in the courtyard at the Pontifícia Universidade Católica (PUC) makes the air seem denser and more humid than it really is. I had been asked by an anarchist group (Nu-Sol) to present on my experiences in Rojava and was about halfway through the evening…

“So the YPG has a 45 day training protocol…” Then a series of deafening, wrenching explosions tore through the courtyard like thunder. I stopped for an instant, regrouped and continued.
“Jeeezus…” I said, “I felt safer in Rojava than in the US; I guess I can add Brazil to that list.” As my friend completed the translation of the sentence there was a ripple of laughter and I returned to business.
It was supposed to be easy. A few weeks in Brazil, some presentations, some beach, and then back to the US. And right up to the talk in Salvador that’s the way it had gone.

Then on Sunday, March 13th, a friend and I had decided to stroll down to the beach. As we walked we were passed by one or two folks decked out in yellow and green shirts. Then a few more. And a few more. I turned to my friend and asked, “What the fuck?” 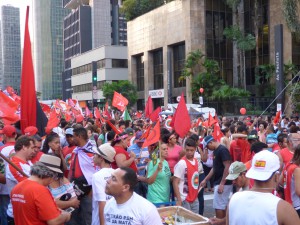 “A soccer game maybe. No, a protest against Dilma and the government. That’s what this is.”

When we turned the corner onto the beach area the entire street was a waving sea of yellow, green and blue, the colors of the Brazilian flag. Many people carried homemade signs denouncing the government and corruption. Sure enough, a protest demanding that Lula, the previous President of Brazil, be sent to jail for corruption and that Dilma, the current President of Brazil, be impeached. We picked our way through the rolling waves of yellow and green shirts, my friend translating the signs and the chants, then whispering the English into my ear. Finally I went into journalist mode and started asking questions. I spoke to two older looking gentlemen who each carried signs denouncing corruption. The men, both in their 70s, were a dentist and a filmmaker respectively. The message from each was exactly the same and simple, Lula is a crook, so is Dilma. They must both leave public life.
The current tale of political upheaval in Brazil is of Byzantine complexity. It includes a centre-left party (The Worker’s Party, PT) that was once respected (or feared), and it’s slow slide into corruption and decay. Recently criminal investigations and judicial proceedings were initiated against Lula for taking kickbacks while running the country’s lucrative oil concession, Petrobras. At the same time Dilma, the once popular female President, has had her hands full with charges of bribery in the legislature, payoffs to move legislation forward, and an incoming bill for impeachment that has a better than average chance of approval. Issues of race and class are also prominent as the PT has traditionally been the party of the poor, of black folks, and, as the name implies, of workers. The opposition is made up of electoral parties and large media firms that seek to represent the rich, the finance sector, and they have proven to be social media savvy, and increasingly bold. Finally over the past year, the economic situatiuon in Brazil has become sufficiently grim that the media refer to it as “The Crisis.” And to add one last ingredient to this already volatile mix — memories of the decades of dictatorship (1964 – 1980), the repression and military rule, simmer darkly in the minds of Brasilieros, old and young.

After returning to the hotel I sat and wrote some notes and then it occurred to me — I asked my traveling companion, “Did you see any black folks in the demonstration?”

She thought a moment and replied, “One or two.” 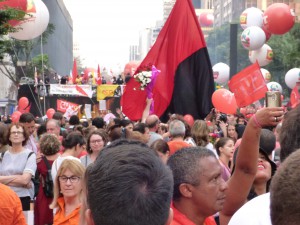 On March 18th after my return to São Paulo I attended the next installment of the ongoing political melodrama, a protest by supporters of Lula, Dilma, and the PT. By now the discourse had become more shrill, including a small occupation by anti-Dilma forces of a sidewalk on the Avenida Paulista, the main thoroughfare in that behemoth of urban sprawl. Anti-PT forces were also sporting signs with a hand print that included a missing finger, a clear reference to Lula, who as an auto worker had had his little finger sheared off in an industrial accident. A number of folks I had met had decided to check out the demo and so we went. The Avenida Paulista was the site for this demo and prior to the arrival of the PT faithful the police had cleared out the anti-Dilma occupiers in order to avoid an inevitable collision. My first impression was one of the overwhelming force that the Military Police had assembled to keep the demonstrators in check. As I stepped out of the subway I saw two immense armored vehicles painted in grey and dark blue camouflage, with rocket launchers for tear gas and concussion grenades parked in the center of the Avenida. One of my hosts turned to me, pointed at the vehicles and said, “Those they bought from Israel. They were initially designed for the rioting in Gaza and elsewhere.”

Huge crowds again, most dressed in the red of the PT, some communists and socialists, perhaps as many as 100,000 attended the Sao Paulo demo, and there were dozens of other pro-Lula gatherings across the country. As we walked through the crowd my companions saw a number of other area anarchists, and a group of anarcho-communists waving a huge black and red flag. This prompted me to ask, “Are the anarchists here supporting Dilma and Lula?”

“Yes and no. At this time the issue is not pro- or anti-Dilma, it’s a coup. That’s why many anarchists are here.”

As it turned out that’s the reason that a number of other people were also there. I spoke to one gentleman, a salesman, who replied to my question as to why he was at the rally with one word, “1964.” The year that the military seized power.

There was a sense of urgency at this demonstration absent at the anti-PT rally, and part of the discourse, present in the signs and speeches, demanded the maintenance of democracy and democratic structures. My final impression was the impressive size of the demo and how different it felt from similar gatherings I had attended in the US. The Brasilieros were certain, clear in their attendance and proud of their views. In the US, there is a certain sense of anxiety and from some participants also shame at events like this. As if having the freedom to speak was sufficient and actually exercising that right was some kind of weakness or insult to their communities.

As I concluded my talk at PUC and packed my laptop into my bag several students entered the courtyard. Speaking rapidly they seemed frightened, unsure. I asked someone to translate and was told that there had been a scuffle between pro- and anti- PT forces. Evidently the students of the faculties of Law, Economics, and Business Administration had rented a large truck with loudspeakers, parked it in front of PUC and commenced to conduct a rally in support of jailing Lula and impeaching Dilma. This brought out the (mostly) lefty student body who then proceeded to harass and torment their peers. In the final scuffle the left students had demanded to have access to the mic so they could present their case. More pushing on both sides and the truck was driven off. Then the Military Police moved in shooting concussion grenades and tear gas, including firing one tear gas canister into the third floor window of a classroom building. 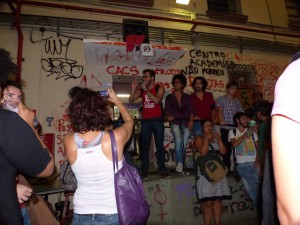 By the time I had walked out to the street the remaining group of left wing students were listening to impromptu speeches from folks who climbed onto a set of stairs. Most of what was said was less about the actual issues, and addressed more generally fascism, and warned of a possible coup. In the morning a few news feeds had video of the action and one was truly unique. It showed the Business, Law and Economics students denouncing the possibility of a left-wing coup and revolution. They chanted the exact same words that I heard on the Avenida Paulista just a few days earlier, “No to the coup!”

As a final observation, it’s incredible how much of the discourse and dialogue of the anti-Lula crowd was grounded in the language of the Left. As if the Brazilian elites, bereft of any real political ideas, had settled on parroting the word “corruption” in place of a real programme. It seemed they were following several steps behind the PT and its allies. I never conjecture. In this instance though it seems that the political tension in Brazilian society is leading to some sort of denouement, a potential collision. The outcome of which, whether played out in the chambers of the judiciary, or in the streets, no one can guess.

← Dispatches from Brazil One: Swimming Pool and Ocean, Manumission for a New Millennium
Dispatches from France One: the Forces Behind Events, Autonomism and Anarchism, and What Time Is It? →