Dispatches from Greece Three: Notes from two months in Exarcheia 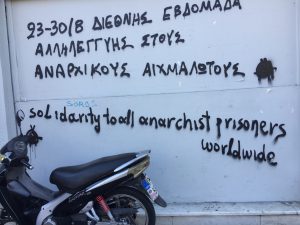 “Come and get food, Motherfuckers!”

The call, in a slight accent, echoes down the marble steps of the squat—the daily common meal is ready. In many ways this call for food encapsulates the nature of squatting in Greece. There is a complex relationship between squatters, a familiarity born of a shared life and a shared enemy. There is also a challenge, and slight but perceptible pressure to maintain relentless social contestation, always working, pushing towards the Idea. The results can take multiple forms, actions, demos, art, theater. A number of the squatters use art as a weapon. They paint, they build installations, they alter and manipulate the urban environment—joyfully. They plot, they plan actions, they look for openings in the armor of the Social Enemy to strike and cause harm. They speak of love and hatred, with no embarrassment. There is camaraderie, days spent talking, laughing, shadow-boxing, spray-painting or wheat-pasting on the walls of the squat. One of my most profound memories is hearing laughter ringing through the building as the younger squatters horse around late at night. Finally there is a fierce and abiding loyalty—made of living, working, fighting together. I knew, once accepted into the squat, that whatever happened no one there would ever deliberately let harm come to me, and my Comrades knew that I was committed to them in the same manner. This, of all things, proves the worth of living in common, in Commune. Physical, emotional, spiritual safety in the world is a joke perpetrated directly by the Social Enemy—how much better do anarchists do it! Face to face, the commitment becomes real—a material thing, not some nightmare uniformed asshole threatening prison, parole and degradation. I’ll take the threat of several black clad figures in the middle of night acting on conscience to help a Comrade over a cop loaded with laws and punishments. Some of the squatters are guests, visiting from almost every point on Earth, though during my time—primarily Europe, France, Spain, Italy, Germany, and the USA. Others are long-term, mostly Greek, and the occasional American.

Almost everyone takes turns prepping food, and sitting an early morning defense shift, the only two real “chores” at the squat. Everything else is pretty much left to chance, cleaning the toilets, sweeping and mopping common areas, emptying ashtrays, occasionally standing outside on the street when things in Exarcheia get tense, and making tea or sweets for the Assembly. This arrangement overburdens some folks, and it underburdens others, which is the nature of non-coercive social relations. Something to be accepted, not denied, nor decried. It’s the way things are.

The squat I found myself in is considered one of the “blackest,” meaning that most of the explicitly political squatters are either anarchist individualists or nihilists. Other squats tend to be less black, more red—meaning anarcho-communist, syndicalist or some stripe of collectivist. Some of the finer points of theory are abandoned in favor of the nature of the relationships that the different squats and squatters have developed over the years. Perhaps an overstatement, but a balance of animosity and agreement reigns between the squats. Sometimes forming alliances, occasionally coming to blows. Which is one reason that the December 6th 2016 riot was so significant—where personal and political grudges were shelved in favor of an all-out coordinated effort at defending the community from police incursion. Even the authorities registered surprise in the main stream media after the night of rioting, going so far as to authorize a few patrols near Exarcheia Square by cops in armored jeeps. This presence was quickly curtailed, the authorities realizing that the provocation was hardly worth the potential backlash. In fact only one squat bowed out from the defense of Exarcheia—and it came under criticism for what was seen as a real inability to play well with others.

The reminder, this time registered with some anger by the cook, is greeted with muted derision and groaning by the residents. It’s early by squatter’s time—1pm—and those left in the building are sleeping. I drag myself out of bed, force down a coffee and make a plate of food. It’s good—potatoes, rice, salad and some kind of fried meat. Could be seafood—eel maybe.

I talked to the cook later that day and asked about the meat, she said, “Sheep cheeks and tongue…good right?”
I smiled and said, “Really good, thanks.”

Like the meal, living in commune is like that. The more you try new stuff, the better it gets.