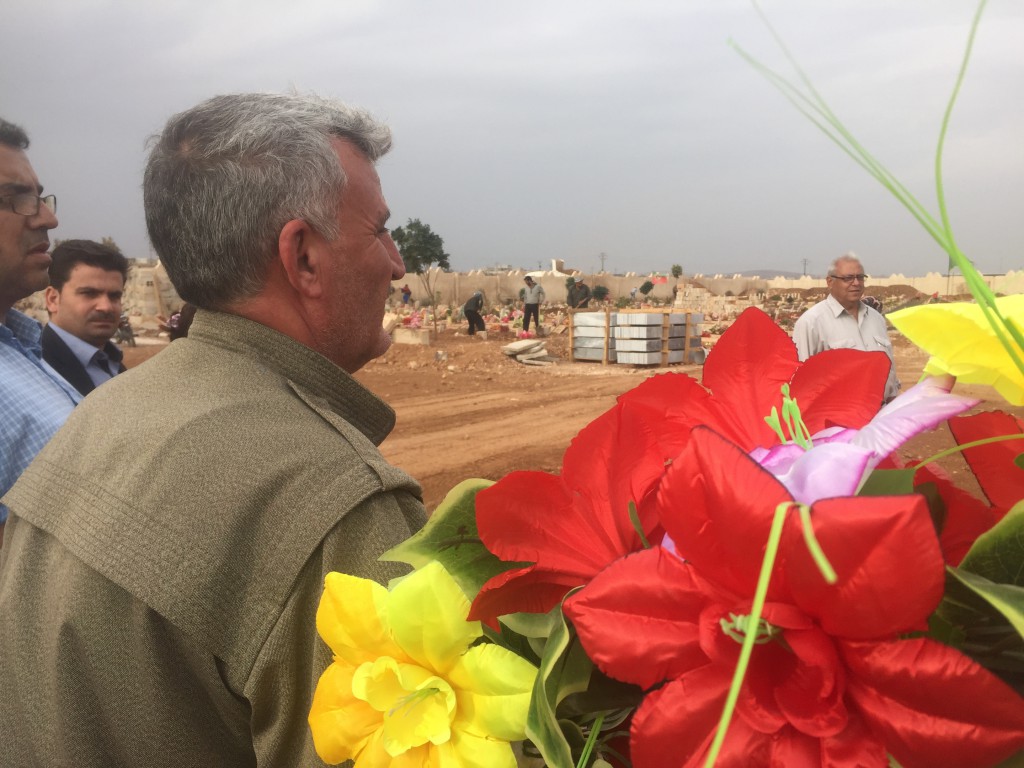 “Mr. Errante … did you visit Syria?” The US Border Patrol officer stares at me through the bulletproof plastic that separates us. He shifts in his seat. The man wants an answer.

“Me? Syria? No. No way … too dangerous,” I say. Praying the lie doesn’t show on my face. I’m in Dublin, at US Pre-clearance, almost back to the States and now, it seems, I may have some explaining to do.

He scoops up my passport and customs declaration in his right hand and says, “Come this way Mr. Errante. We’re going to search your luggage.” For the first time, during the entire trip, that sickening feeling of real fear rises inside me. 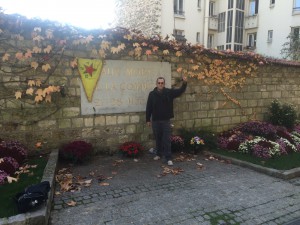 Two days earlier — Paris. A singular morning, fresh sun and breeze, the kind of daybreak that only the Mother of the Revolutions can serve for breakfast. I walk through Père Lachaise Cemetery my head and shoulders hunched forward. I know this old boneyard like a good friend, and there’s one memorial that calls me now. The Mur des Fédérés (the Wall of the Federals). A place on the enclosing wall of the old cemetery where several hundred Communards were taken to be slaughtered by the forces of law and order. The memorial comes into view, a simple plaque on a wall of stone. Nothing more. I pull a YPG flag from my bag 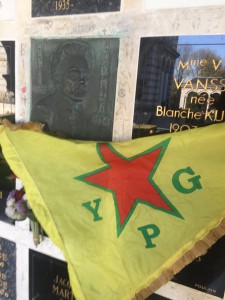 and drape it over the memorial. I take a photo. A German man and his daughter walk around the corner. I ask him to take a photo of me and the wall and the flag. As he preps, my hand once again rises, almost unconsciously in the V salute and he snaps a few photos. I am not done. There are two more photos to be taken. One photo with the flag draped over Oscar Wilde’s tomb, and one photo at the sculpted bronze cap that seals Nestor Makhno’s ashes into the Columbarium. Taking the final picture I notice an odd thing, did the likeness of Makhno smile a bit when I placed the YPG flag? Or is it me?

The Border Patrol officer walks me to a holding room in the Pre-Clearance area. I am told to sit on a row of benches. As I sit I see that I am facing a wall of waist high one-way mirrors. In the reflection I can see several officers directly behind me looking at my passport and paper work. They talk quietly and nod. 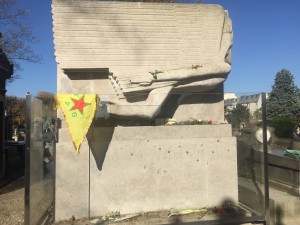 My mind begins to play smuggler’s games. I go through all the potential contraband in my bags, numerous YPG/J flags, buttons, and patches. A book called Stateless Democracy, TEV-DEM flags, HPC flags and an HPC emblazoned brown uniform vest including two Velcro pockets that exactly fit a Kalashnikov banana clip for 7.62mm X 39 mm bullets. Additionally, several pro-YPG/J, TEV-DEM magazines in scary Daesh-looking Arabic and latinized Kurmanji. Welp, enough there for a few hours of interrogation, maybe even a day or two of detention. One of the Border Patrol officers calls me to his window. I stand, turn, and walk with measured steps to where he motioned me.

After the stroll through Père Lachaise I hail a taxi and head to the hotel. The taxi driver swerves through the Place de la République on our way back to the Left Bank when it catches my eye. A flag; the yellow/red/green flag of the Kurdish Autonomous Region, then two, and then three of them. Finally I see a huge YPG pennant, yellow with red star, as it lazes and hops in the mid-afternoon swirl. I yell at the taxi driver to stop and pay the fare frantically. I hop into traffic on the Rue du Temple and quickly read the sign over the bandstand, “International March against Daesh, For Kobane, For Humanity.” 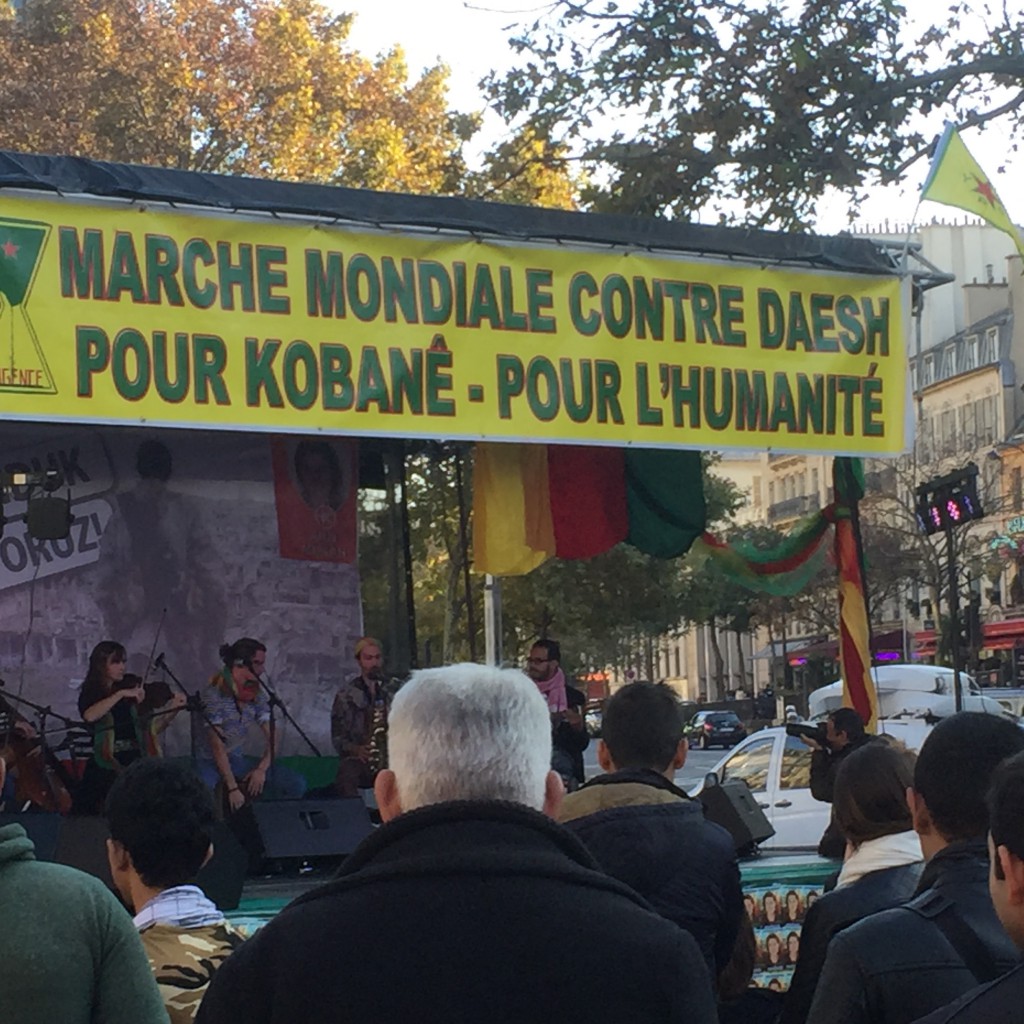 Whooomp, there it is, it’s November 1st — International Kobane Day, and one more time, I am enmeshed in the Revolution.

I walk through the crowd, smelling the food, seeing the colors, transported back to Kobane and Cizere by the sound of spoken Kurmanji, and the feeling of rebirth, of making a new world. There is a tent where representatives of the Halkların Demokratik Partisi (Turkish, HDP) sit, drink tea, and converse. I walk over and introduce myself. I show them some of my photos and posts about Rojava. They speak together, then someone is sent to find a translator fluent in Turkish, French, Kurmanji, and English. After what might be my last glass of Kurdish style tea for a very long time, the translator arrives and we begin to talk about how HDP integrates activities with events in Rojava. As the conversation runs I once again feel it. The openness, the excitement, the lack of fear, the infectious hope in everything these folks do and believe. The. Damned. Hope.

The Border Patrol officer eyeballs me up and down and asks if I have any cigarettes in my bag. I grin and say, ”Yup, 15 packs of Gitanes and Gauloises, can’t buy’em in the US anymore, y’know.”

A slight smile crosses his face and he asks about money, gold, anything else I might try to be getting across the border. I answer that I have a few Euros, a few dollars — maybe a total of $100 altogether. No gold, no cheese, nada. He tells me to have a seat while they x-ray my bag. I return to my seat. Only one thought crosses my mind now, did the YPG/J use any paint on those flags that might show up on an x-ray? Oh well, what the hell. I’ll find out soon enough. 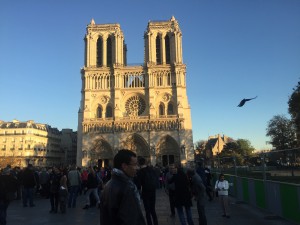 As I leave the rally one last sign catches my eye, white on black, and bold, cutting statements in French — demanding victory for the YPG. Well, it’s the folks from the Fédération Anarchiste (FA), come to voice an opinion. I saunter over and introduce myself, they know me a bit, I know them a bit. I am invited back to their infoshop just off the Place de la République. I sit for a while, tell them what I’d seen in Rojava. They ask questions. I have some answers — not many. I walk around their space, buy a few posters, thank them and leave. Now, a short night’s sleep, a long day’s flight, and home.

The Border Patrol officer calls me to his window. I am now frustrated and angry and hope I can hold my tongue. He looks me up and down one last time and says, “Mr. Errante, you can proceed. Your bags will be put back on the plane. Sorry for any inconvenience.”

“No inconvenience at all, really,” I respond. And with that final lie I leave Preclearance, feeling very much, sodomized.

At the San Francisco airport I debark the plane and walk slowly toward the bag claim. It’s taken me 26 hours to travel what should have taken 13. My back and legs ache and my head feels like a tree is growing in it. As I round the final corner my compañera appears up ahead. She smiles and we walk quickly to each other. I touch her hand, it is cool and warm, it feels like love. We embrace, I smell her hair, and I whisper, “I made it.”
“Home,” is all she replies. The sound of her voice — dusky, low, familiar — tells me the rest.

(My name is El Errante. My name is Paul Z. Simons. Thanks for reading — hope you enjoyed the Dispatches.) 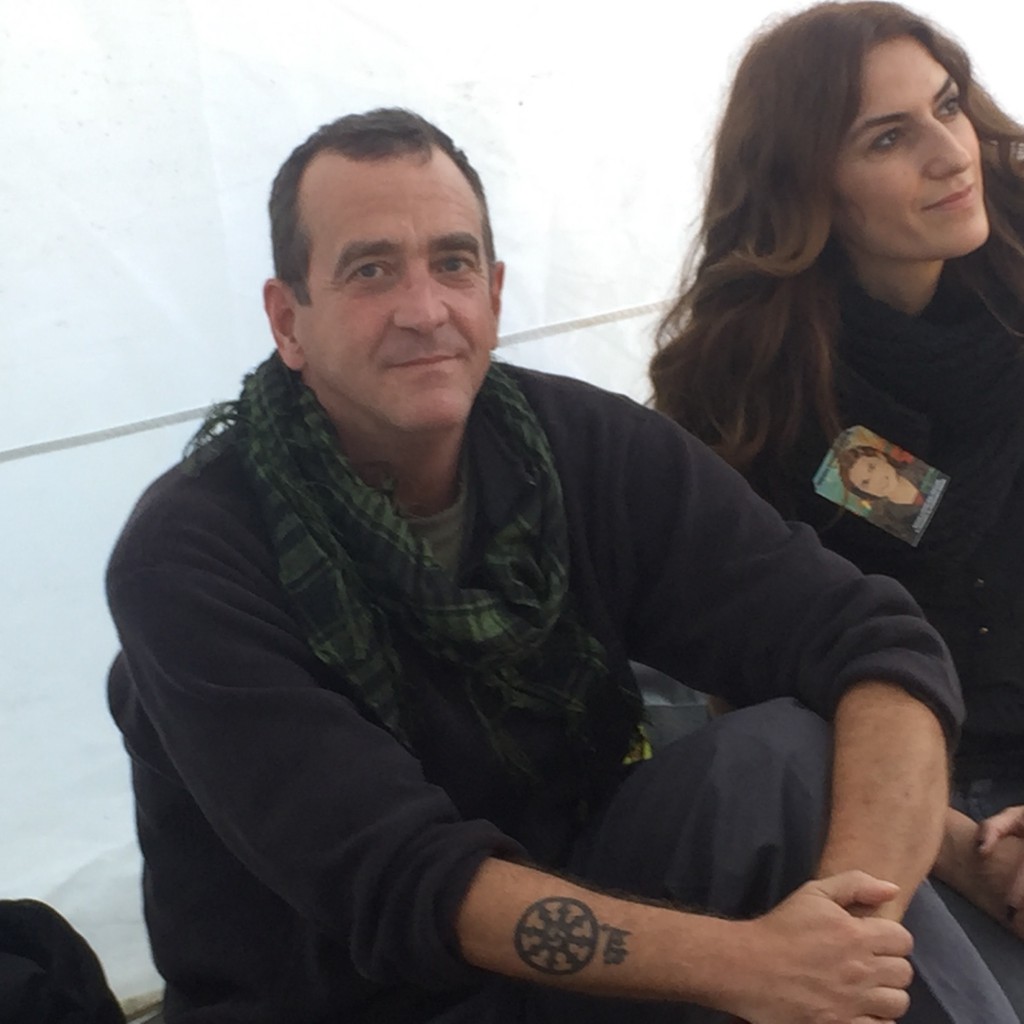