Dispatches from France Four: Nantes Manifestación 6/2/16 Postscript, A Night at the Opera 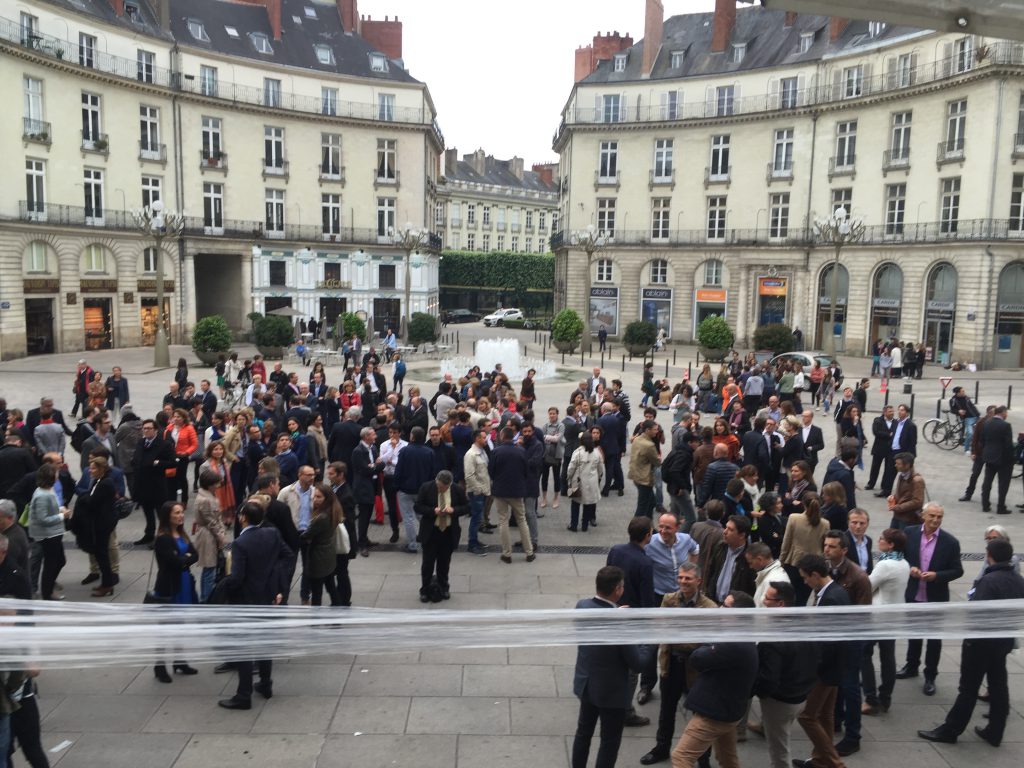 “When the National Assembly becomes a bourgeois theater, all the bourgeois theaters should be turned into national assemblies.”
Graffiti, Paris May 1968 (above the entrance of the occupied Odéon Theater)

During the impromptu manif, referenced in the previous dispatch, several people moved through the crowd handing out leaflets. I took one, as did most of the folks I was with. They said that should the crowd be dispersed — as happened shortly thereafter — that folks will regroup at 6pm at the same assembly spot that the unions had used earlier in the day. It also indicated that food would be served and that more actions might happen. The afternoon was spent at a comrade’s apartment eating, hanging out, talking about demos in other countries that people had attended, drinking coffee and the local beverage Bretagne cidre.

At around 6pm we all headed out the door to see what was on the organizer of the event’s mind. We arrived at the rendezvous to find maybe 50 folks hanging out in small groups. Many were drinking beer, and the mood was decidedly more relaxed than the initial encounter in the morning. Some of the comrades were certain it was going to be an autonomist shenanigan, but only a few were there, and they seemed as curious as the rest of us. Finally about a half hour later a guy went from group to group, spoke for a minute or two and then would move on. He approached us and said that we were going to the theater area in Nantes and show support for some of the workers there, and that after we would meet at a park for food and drink. By now there were about 75 folks total and we set off to our first destination, walking initially in the center of the tram tracks and then blocking the road as we finished the march. Loud whistles and shouts came from the group, and occasionally folks would chant or sing. Everyone felt good, as I learned on a hot August night thirty years ago, its great to riot, and 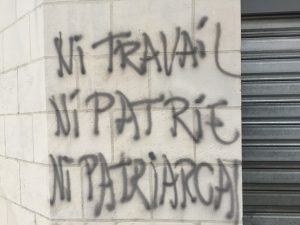 even better to do it and not get caught. As we neared the theater area in Nantes we came upon the rear of the Nantes Opera and wheeled down one of the building’s side streets, finally pouring into a central plaza. As we arrived applause and shouts from protestors already there could be heard. Finally coming into view of the plaza it took about two seconds to realize that this was no show of support, it was something very different indeed.

Arrayed in the front of the Greco-roman columned Opera, were about 100 folks dressed in casual, but expensive attire. They had tans. They wore Rolex’s. And they were really pissed off. Standing under the portico were dozens of radicals who moved in and out of the Opera building freely. Occasionally someone from the plaza would walk up the steps, negotiate a path through the malcontents, enter the building and ask a question or two of what looked like Opera employees. Inside the building a man stood on the steps that led into the theater proper, he waved a large CGT red flag. The foyer was packed with folks from the morning march;[:] autonomists, anarchists, radicals, union folks. After one look I turned to a comrade and said, “It’s an occupation.”
“Not yet. We’re not completely into the theater. But it could be,” he replied.

In one sense the modern revolutionary era was kicked off by an occupation, that of the Bastille. In fact, as the July Column (that commemorates the revolution of 1830) stands in the place of the hated Bastille to this day — one could conjecture that this specific occupation has continued for 200+ years. The other occupation the situation called to mind was the seizure of the Odeon Theater in Paris on 15 May 1968, by a revolutionary committee of artists and students. They held the theater for a little less than a month when it was finally forcefully cleared by CRS goons.

The would-be occupiers in Nantes were listening to a well dressed woman speak to them from the stairs when I pushed my way inside. She thanked them for coming, expressed hope that the Loi du Travail manifs would be successful and then asked them to leave. Of course, no one budged. There was some additional milling around by the protestors. I went in and out of the building several times, the bourgeois who stood in the plaza and watched as their evening plans were being shattered fascinated me. Their faces were alternately angry, confused and indignant. Once or twice I caught a conversation between a protestor and one of the plaza crowd. The bougeois would ask questions like, “How could you do this?” Alternating with demands that the mob move on to other engagements. Like she was speaking to a child. And protestors would fire back about the Loi du Travail, the ZAD, or just ignore the question, and the questioner, completely.
Meanwhile on the plaza, two men in suits viewed the full scene from a 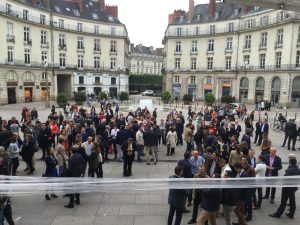 distance. I turned to a comrade pointing them out with a nod of my head and he said, “Right. Likely CRS officers, deciding what to do.”
I walked back inside to watch a brief shoving match had broken out between the Opera employees and the protestors. It was pretty low key, as these things go. In fact the crowd seemed less interested in a full occupation that in taking the protest into the enemy camp. And if that was the goal, they succeeded.

Finally, some food and beer showed up for the mob. Evidently they had decided to party in the shadow of the Opera. The folks I had come with decided to eat elsewhere. So we walked off as the protestors milled about inside and outside the theater, talked, ate food, and relaxed.
I still was confused about the almost complete absence of cops; save the two CRS supervisors and some Nantes gendarmes who rode by on scooters, we had seen no one. I asked about this and got a reply that illustrates in many ways the ongoing nature of social contestation in France. The comrade replied, “They won’t do anything as long as the protestors eat and drink and don’t destroy anything. This is a nice neighborhood, they won’t attack unless absolutely necessary.”

As we walked we came upon another plaza removed by about 200 yards from the Opera plaza. In it dozens of gendarmes in full riot gear lounged by crowd control vehicles, talked, and waited to see if they would eventually be needed. Oddly they looked as relaxed as the crowd they were supposed to be ready to mercilessly attack with teargas and truncheon. That night, however, evidently in everyone’s opinion, another riot just didn’t seem worth the bother.