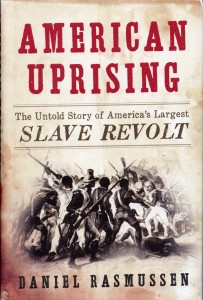 So to keep the rhetoric and material in Modern Slavery alive with tales of slave revolts and insurrections, I inadvertently picked this book up while on my way through some airport, somewhere. After looking at the young face of the author, and reading that his alma mater was Harvard, and that he had received a number of prizes during his years there, my worries grew; surely this couldn’t be a book that demonizes slaves for revolt? Harvard is a primitive place – but could it have reverted even deeper into the muck of ruling class snobbery, inbred genetic mutation, and bad nicknames? Finally I relented and bought the damn thing – what the hell, its better than watching the movie on the plane.

Dangerous Cargo
The author begins by focusing on the night of Epiphany, January 6, 1811, and details the extravagant balls, meals and gambling of the local white slave owning gentry who lived in or near New Orleans. Epiphany of course being the kickoff for the entire Carnival season that culminates annually in the liver-ossifying orgy of Mardi Gras. Simultaneously, as the masters were celebrating, he describes the revelry of the local slaves gathered on the Commons in the city. Perhaps as many as 500-600 individuals all told were present, and they danced in large circular formations, drank local fermented products, crowned a king for the event, even as the local gentry crowned their own Rex for Mardi Gras; and also plotted to pull the whole economic and political superstructure down by armed rebellion.[pullquote]        The real touchstone for the revolt, as it was for John Brown, was the success of the Haitian Revolution in 1803, which, as noted elsewhere freed the slaves, granted independence to the island nation, and as if to put paid to the whole deal banned all French citizens from Haiti – forever.[/pullquote]

The planters were men who had abandoned Enlightenment era France for the possibility of huge profit and reward as a result of hacking some kind of living out of the wilderness. Sugar, as it turns out, was the right crop for the areas directly west of New Orleans, that ran along the northern banks of the Mississippi River. This area, named the “German Coast,” was famous for its heat, humidity, snakes, swamps, and many planters justified the use of African slaves as a result of this harsh environment. The transport of slaves to the United States was outlawed in 1808, but it is estimated that in the forty years prior the passage of the law proscribing importation of slaves that as many as 24,000 Africans were disembarked in New Orleans. The mortality rates of the slave trade are staggering. Forty percent of those captured never even made it to the west coast of Africa for transportation, ten percent perished during the Middle Passage, and only about a third would survive through the first four years in the New World. There is another side to this, though, and it shouldn’t be overlooked, many of those transported and who survived were some very tough customers indeed. The two slaves most associated with the German Coast Revolt are Kook and Quamana. The names suggest that the men were Akan, an African empire at the height of its power in the late eighteenth century; essentially a military union of a number of different tribes. The Akan controlled significant tracts of land throughout modern Nigeria, Benin, Togo, and Ghana. Many of the Akan slaves brought to the US were common soldiers who had been trained to make up the impressively large armies that African nations at that time fielded in warfare. It is likely, therefore that Kook and Quamana at least knew how to use weapons, and very probably had been trained to fight, even if they had never gone into battle.