Pure Black: An Emerging Consensus Among Some Comrades? 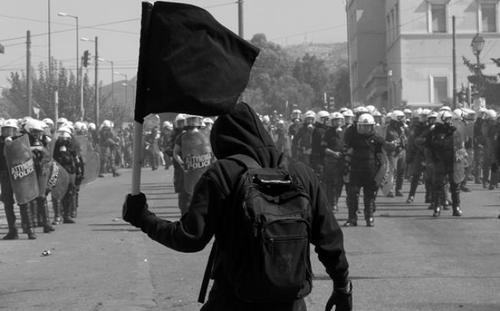 The term “black” anarchist has been thrown around recently in a number of international milieux and journals. Indeed during the last few years of my travels throughout North and South America and Europe I have noted repeated attempts to define, through action and theory, the ideas associated with black anarchy. Following is a brief, incomplete outline of some of the more common aspects of what black anarchists think and do. These tendencies are numbered for convenience, and not to show priority or importance.

Red Excursus: I will not discuss “red” anarchy as it seems well defined by the collectivist, syndicalist, communist variants of anarchist ideas that were developed more than a hundred years ago and still enjoy a great deal of popularity and adherents. I emphasize that I don’t see the two various strains as being mutually exclusive, opposed, or even necessarily very different at the macro level. The old sectarianism and exclusion, a gnawing symptom of Marxism and the Social Democracy, plays no role in this essay. I am attempting to describe and provide some topography to a growing, relatively new agreement among a particular group of my comrades, in doing so I support and encourage those who follow different anarchist ideas and paths. No one is wrong, no one is right. The best we can hope for is clarity, not hegemony. 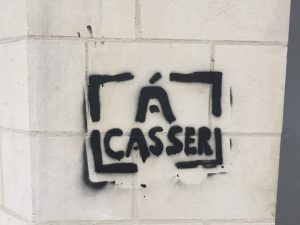 In this context violence is defined as a tactic, whether applied to insurrection, riot, attentat, or simple refusal. There is an almost overwhelming consensus among the black anarchists that the use of violence is necessary, indeed desirable, perhaps essential. The international growth of the various FA(I)-IRF cells, the example of the Greek CCF and Revolutionary Struggle, the concomitant growth of the non-anarchist but equally engaging actions of the eco-extremists in Mexico, Chile and Brazil, and the myriad anonymous burnings, ATM destruction, and attacks that populate the current global anarchist media echo this resonance. Whether it is the Molotov arching gracefully through the night air, the flaming barricade, or the flagpole—turned truncheon—crashing into fascist bone, the black anarchist greets all with approval.

There is a strong individualist strain in black anarchism, mostly as a function of activity and less due to long nights breathlessly reading Stirner. In essence when engaged in actions it’s easier to work in small groups, and sometimes alone rather than attempt to build large or even medium sized organizations. These small groups which I’ll call teams, a word taken from our Athenian comrades, bring into clear relief the importance of individual initiative, they decentralize decision and action, they emphasize clearly that while there is no I in team, there is an “m” and an “e.”

In this instance, nihilism I’ll interpret as the realpolitik of anarchism in 2017—all the various ideas, concepts and conceits of an anarchist victory via revolution or insurrection in the current context are nothing more than political heroin. Once this simple, obvious fact is accepted there are two courses, resignation and lassitude or savage attack without any real hope of success. The black anarchist chooses the latter, always.

A part of the black anarchist consensus is the desire to completely reject any compromise or cooperation with nation-state, Capital, and markets. Leading many in the milieu to undertake consciously political illegal activity. This varies from place to place but includes the positive activities of squatting, occupations, shoplifting, out-right store robbery, burglary and more. In terms of negative activities this new variant of illegalism includes refusal of all taxes, tolls, welfare, NGO handouts, and state-run free clinics.

This outline of black anarchism is brief, incomplete, and a piece of journalism, not conjecture. This is what I saw, what I experienced in the past several years visiting and working with anarchists on three continents. It is both memoriam and prospectus.